The perils of Pride: Flying the Flag vs. a Known Factor 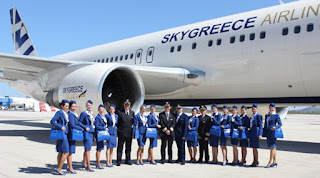 As a reputable Travel Counselor, quite often I see travelers book tickets on new startup carriers that offer non-stop service or low fares (or both) to their homeland.  More often than not, they don't ask much, and they get there and back safely, and on time.  For a few seasons, anyways.  Then there's the nightmare startups.  The fly by night operators looking for a quick buck being bilked off of their passengers sense of civic pride or frugality, or any other reason under the sun.  Like SkyGreece Airlines.


SkyGreece started off with good intentions, for sure.  To connect the Greek diaspora in North America to the homeland with, eventually, year-round service.  TONS of PR went out in cities such as Montreal, New York City, Toronto, and in Athens, Greece.  Finally, year round connections to Athens from North America!  Screw Air Canada, Air Transat, Delta and US Airways (now American) for cutting winter flights!  The local Greek populaces were thrilled.  Everything looked like it was on the up and up.  Offices were opened in all of the cities that were being planned on, with headquarters in Athens.  Their first aircraft, a Boeing 767, was painted up with a giant Greek flag on the tail.  Parties were thrown all over Athens and Toronto when the plane did its proving runs.  To gain operational experience, SkyGreece flew charters for NATO and the United Nations out of Athens and Africa to the Middle East. Sure it sounds sketchy, but you have to start somewhere before anyone will let you fly the Transatlantic hops to the US and Canada. 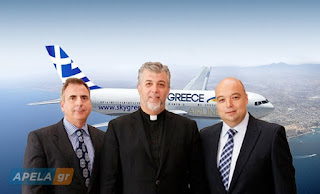 The airline was formed by a former Greek Orthodox Priest and a restaurateur.  Other management types involved lower level airline people who really shouldn't have had that much responsibility thrust upon them.  The Priest could be seen on Greek news outlets touting "authentic Greek hospitality"  and "more luggage allowances than any other airline" or my personal favorite, "Greek Pride in the Sky"!  Revolting to say the least.  Which begs me to ask, what on Earth is a Greek Orthodox Priest doing in business for himself, AND in the TV spotlight?  Better yet, what sort of upper level management experience does this guy or the restaurateur have to think they can make a company as complex as an airline work?

The airline started flying the Athens-Toronto route on May 23, 2015. Load factors were still off (flights averaged around 20 passengers per flight), but things were looking up.  Advertisements started appearing on Greek TV here in the states announcing new service between Athens and New York/JFK.  The airline launched Thessaloniki-Toronto, some flights operated with a stop in Budapest or Zagreb.  Management was living high on the hog.  Well, as with anything mechanical, things started breaking down.  Armrests went without repair and duct tape was seen applied throughout the plane.  Other problems kept creeping up. 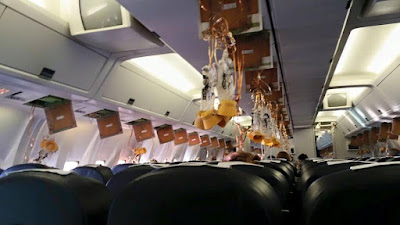 June 14th, 2015 rolled around, with the 767 being readied for departure out of Athens, heading for Toronto.  30 passengers were on board the flight.  According to passengers on the flight, the plane had a hard time taking off, which is not unusual for a fully laden 767 in the middle of summer out of Athens.  What happens next is where things get dicey.  Upon climbing out of Athens, the pressurization never took hold, and from what it sounds like (speculation here), the cabin pressure valve may not have fully closed.  This has been a known issue on the 767-300 and a few other planes.  This kind of depressurization seldom occurs, but when it does, while it can be frightening for the passengers, is easily remedied and Boeing has a fix for the problem.  Whether SkyGreece did anything about it or not, though, is what I'm getting at.  As the plane climbed through 35,000 feet (FL350), the oxygen masks dropped and for sure the master alarm in the cockpit rang out.  From what has been garnered from the passengers, the masks that did deploy were brown, oxygen was NOT flowing, and a lot of tubes were tied together.  Not only is this bad, but it is illegal.  The crew made a rapid descent to 10,000 feet to equalize the pressure and keep the passengers from losing consciousness, all the while initiating a fuel dump to get to the legal landing weight for a return back to Athens.

Upon landing, as is the custom with most every airline, the flight was met by the ground handling company, GoldAir and parked.  Here's where SkyGreece made mistake #1.  They knew the flight was on its way back.  They should have had their own representative at the gate making arrangements for the passengers along with the Goldair ground staff.  Instead, passengers were left in the dark about their situation.  For the next few hours, they fought with the ground handlers to give them any piece of info on anything ranging from finding alternate transportation back to Toronto, to a hotel stay for the night, or getting them onto the same plane after its been fixed.  No news was to be had from anywhere.  Eventually, SkyGreece did put the passengers up in a nearby hotel, and they returned to Toronto on Air Transat the next day.  The ordeal was something normal passengers don't usually go through, and some thought they might be in more danger and sent text messages to loved ones saying goodbye.  Some passengers have even required psychiatric help coping with the incident. 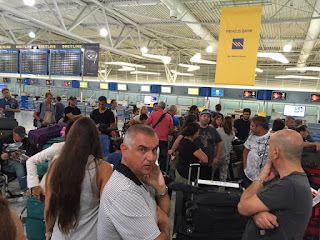 During this time SkyGreece also wet-leased (complete with crew) an Airbus A330 to commence Athens-New York/JFK flights.  In all, only 4 complete flights ever flew before the leasing carrier took back the airplane due to non-payment by SkyGreece.  There are passengers out there with future tickets on the JFK leg that still have no idea about the implosion of SkyGreece and they are out their airfares.

Since the June 14th depressurization, the 767 has had a cascading dispatch reliability rate, with flights getting pushed back further and further, leaving hundreds of passengers with shattered travel plans.  On August 28, 2015, the other shoe dropped and SkyGreece stated that they have suspended all operations...temporarily.  In Athens, Budapest, Zagreb, and Toronto, hundreds of passengers had been waiting for the previous 2-3 days for a flight out.

Several things could've been done by SkyGreece to remedy the backlash they so rightly deserve in the social media universe (check out the facebook group "SkyGreece Troubles", the Greek travel Pages facebook, any airline industry page, etc, etc).  They could have been upfront with their passengers, not just on the inflight emergency, but those with future flights.  Instead, management cowers behind the Canadian Transportation Agency and a small ethnic Greek newspaper called the Montreal Greek Times.  Speaking of this newspaper, the publisher's own words have admitted his association with the management of the airline, go so far as to label the former Priest CEO as the next Jesus Christ.  It really makes me wonder how much SkyGreece has paid this publisher to gloss over every event that has happened thus far.  It's almost as bad as the American media.

That covers SkyGreece. With management so corrupt, crooked , and vile it is beyond criminal what they have done to the stranded passengers, not to mention the passengers of June 14th. 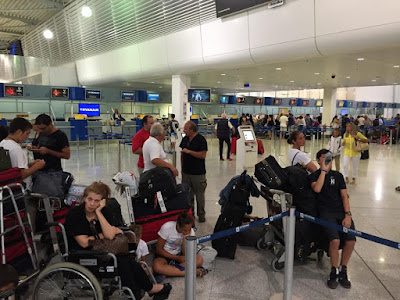 Now, what a real airline will do for you when the chips fall.

For example, let's say you book Delta from New York/JFK to Athens. I use the US routing as that is what I'm extremely familiar with, having been an integral part in the launching of Continental Airlines' Newark-Athens flights back in 2008.

In case of delay, Delta will do anything in their power to keep passengers in all classes updated on the cause of the delay and how long the delay will last, and get you on the way.  Or they will swap an airplane out (still a few hours delay, but better than nothing), waive change fees to other dates within a reasonable timeframe, or in the case of a major problem, they will issue hotel vouchers or put everyone up for the night in a nearby hotel, or at the very least, get people rebooked on Air France/KLM, or Alitalia that night.

In the case of an inflight emergency (thankfully Delta is competent, and these things rarely happen) the plane will return and be met upon arrival by the senior staff of the station and get everyone rebooked, set up for the night, or if possible, on the next flight out with one of the SkyTeam partners.  They will also refund the passengers, OR give them reasonable credits.  They will also dispatch crisis teams to deal with any issues that may arise.

That higher fare suddenly seems a bit more worth it, doesn't it?

As a Travel Counselor, I do not book ANY clients on fly by night carriers such as SkyGreece.  I don't even put my family on those carriers.  I have flown a few of them though, for my own amusement, and luckily, I always have a backup.    Only once have I ever had to use said backup, but I'm glad I had it.  Instances like this also illustrate how important it is for travelers to purchase travel insurance for ALL International travel, no matter what carrier, no matter what the travel plans are. 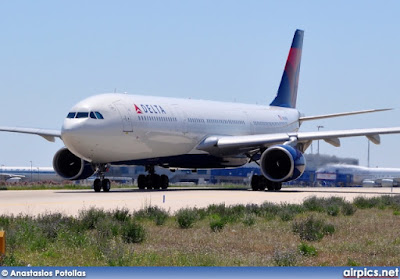