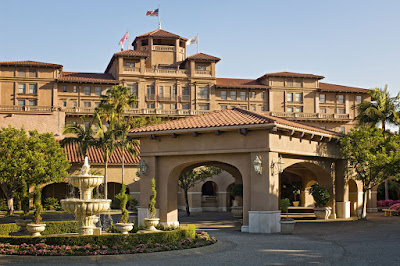 Have you ever checked into a hotel and felt like you were entering your own home?  I felt that way the instant we stepped out of our ride from the airport.  Stepping out of our ride we were instantly greeted BY NAME from the valet and bellmen.  How'd they know?  Ohh...they already had our luggage out.  Fabulous! 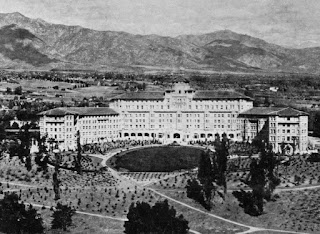 The Langham Huntington Pasadena was built as the Hotel Wentworth in 1907, but construction setbacks, the Great San Francisco Earthquake, and torrential weather delayed the opening, and the venture shut down after its first season.  Enter railroad tycoon Henry Huntington.  Huntington purchased the property in 1911 and after renovations and extensions, plus the addition of the now-iconic central tower.

Having been sold to the Sheraton Hotel Corporation in 1954, it remained flagged as a Sheraton for years until being closed in 1988 for major renovations and repairs.  The lanai and cottages that were a part of the property remained open while construction began and was reflagged as the Ritz-Carlton Huntington until it was sold in 2007 to the Langham Hotels for $170 million.

Enough history, onto the property herself!

We arrived there on Sunday, thinking it'll be a slower then normal day.  Boy were we wrong.  As stated above, the bellhops helped us out of our ride and hauled our suitcases inside.  As stated above, the bellhops helped us out of our ride and hauled our suitcases inside.  Check-in was such a breeze.  Stroll up to the desk and I was welcomed by my own name.  Staying at the Langham properties, I'm starting to get accustomed to this.  Once I got my keys, up to the room we went, a Club King room on the 8th floor, with access to the world renown Langham Club.
Once in the room, we began unpacking and checking out our digs.  It was a very nice room, Classically furnished with an amazing bathroom, there was space to stretch out.  My daughters favorite part was the free wi-fi that came with our package.  While we were unpacking there was a knock on the door.  One of the concierges came up and brought a plate of fresh fruit and huge bottle of Evian...along with a tray of K-cups of tea for our in room Keurig machine, bottles of honey and fresh lemons. "We heard you coughing at check-in and just wanted to help you in getting better."  I was amazed.  I went through that entire tray in about 8 hours!
We had gotten to the hotel  tad early, so me and my daughter decided to check out the pool.  Because there was an event sponsored by Netflix there, there were plenty of celebrities to be seen getting some sun by the pool and hot tub areas.  The pool is heated year round, and from Memorial Day to Labor Day the Poolside Bar is open for business.  We stayed there and relaxed for about an hour. Back in the room I sat down and took stock of the room.  It was nicely appointed and a good size, with a killer view of the gorgeous courtyard below.  It was one of the single King room that are about 450 sq. ft. and perfect.  The extra bed was already in the room as my daughter was a very last minute addition to the trip, but taken care of nonetheless.  The bathroom was completely covered in Italian marble and stocked with Chuan Spa amenities (which are some of the greatest bat products Ive ever used).  For once I didn't feel like I was in a closet.Heading over the the Langham Club, the concierge was setting up for the Club's dinner presentation in just a few hours, so my daughter and I took part of the last seating for the afternoon tea service.  I love this tradition, one that I plan on doing with Susie at least once a year at any Langham property we stay at on a Sunday.  The Club room is a quiet little nook of the club floor with plush seating arrangements and plenty of options to quench one's thirst.  Some of the perks are a computer work station, complimentary pressing of 3 garments, and the above average higher than all else concierge services the Langham properties are known around the world for.I didn't get a chance to ask the concierge how I could take a tour of the hotel due to our incredibly short stay, but that will happen the next time I stay, I just have to take a look behind the scenes! The opinion of this Travel Agent:  When staying in the Hollywood or Pasadena area, the Langham Huntington has you covered from check-in to check out, and well worth the nightly rate.