Aloha a mahalo i keia kipa ' ana mai (Aloha, and welcome aboard) 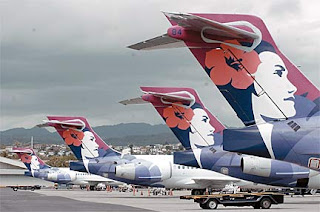 Hawaiian Airlines and its Intra-Island flights are nothing new.  In fact, you might be surprised as to why I'm writing about such a short segment, but, I have to say, since Hawaiian came out of bankruptcy and refurbished and streamlined the interiors of the Boeing 717 fleet, it was one of the most pleasant island hopping flights I've had in a long time.

I had arrived into Honolulu on Delta's nonstop from Salt Lake City around 2:30PM local time and had a while to wait for my connection to Maui.  Stepping off the artificially air conditioned Boeing 767-300 into the Pacific heat and humidity (in a suit no less!), was a shock to my system.  Maybe I'm getting to old to be doing flights like these anymore, I don't know.  Luckily, I didn't have a long walk from Gate 22 to the top of the concourse. 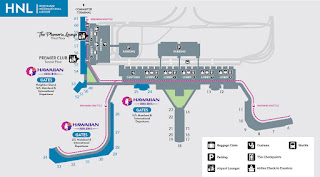 The airport itself is laid out in a weird fashion, with enclosed, air conditioned gate areas attached together by open air breezeways.  Going back and forth between the Mainland US departure gates and the Inter-Island gates is a simple, if not long trek, but if you need to head back to the mainland gates you do have to have your bags scanned for any agricultural contraband that shouldn't be taken off the islands.

My flight to Kahului, Maui was leaving out of Gate 55.  I had about 5 hours to wait, so I parked my carcass and watched the ramp activity and wandered around some.  Walking the span of the Intra-Island concourse I then headed back out to the open air breezeway and ducked into the older Ewa Concourse where Hawaiian's longer Airbus A330 and Boeing 767 operated flights depart from. 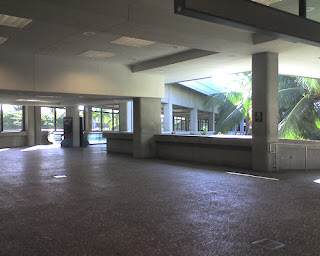 7:30 finally rolled by and I was welcomed aboard Hawaiian's flight 556, that night being operated by N478HA, delivered in May 2001.  For a 15 year old airplane, the new interior Hawaiian installed looked fabulous and clean, and definitely delivered an island vibe.  The 717 is the final version of the venerable Douglas DC-9 twin jet, and has a very comfortable 2x3 seating arrangement inside. I was fortunate enough to snag seat 12A, on the 2-seat side, and settled in for the quick hop.


This is where I was blown away.

On this short hop, the flight attendants got busy with their service, and in less than 20 minutes, and with a smile, they managed to make every last passenger on board feel like they were in their own living room.  You try a 30 minute hop anywhere in the lower 48, and you'll be lucky to get coffee spilled on you with a scowl.  On Hawaiian, they managed to serve us macadamias and pineapple along with the ever present and refreshing Passion-Orange Nectar. 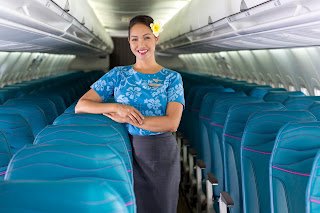 Landing in Maui you could feel the 717's BMW designed engines and their reverse thrust kick in and slow us down just about halfway down the runway.  Getting off the plane was simple and quick since we had a light load and I was hauling down the concourse to meet my Delta flight back to LAX, leaving in 20 minutes!

Before this trip, Hawaii was never really on my list of destinations, but I honestly wouldn't mind going back, even if just to hop on another Island Hopper, then back to the mainland.