Unforgettably Manhattan: An Evening at the Waldorf Astoria

There are some hotels that have built up a reputation over the years for being luxurious, yet pretentious.  Over the decades, they end up resting on their laurels and let the bookings come in based on those original accolades, and they never try to keep themselves a step ahead of the pack.  You try to get away with that in the dog-eat-dog environment of New York City, Manhattan in particular, you're dead meat.  The Waldorf Astoria, that historic bastion of unrivaled luxury and service known the world over, has not let itself fall behind, even with an island full of newcomers. 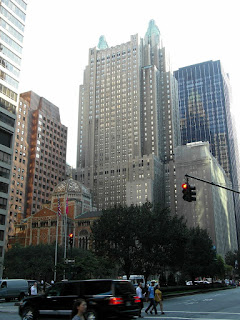 The present building, at 301 Park Avenue, has become an iconic fixture of the Park Avenue scene, and is internationally known for its lavish dinner parties and galas, often being the center of the political and entertainment universes and their various fundraising schemes.  The hotel was opened in 1931, and was the world's tallest hotel until 1963.  The Hilton Hotels bought the property in 1972, having managed it since 1949.

My stay at the Waldorf Astoria blew my mind.  I have stayed over in New York City many times, but never at the Waldorf.  I was excited, at the very least, and I had my family in tow with me, so this was going to be an adventure of sorts.  Originally we were supposed to stay at another luxury hotel down on 5th Avenue, but the rates for the night we were in town were far too extortionate, so I found a better room for a far better rate at the Waldorf, so I decided, what the hell, let's go for it.  I sell it on a weekly basis as a Travel Agent, so I might as well try it out.

We arrived into New York/JFK International Airport around 4PM, and our driver met us in the baggage claim and we were on our way up the Van Wyck Expressway no more than 25 minutes after landing.  The driver however, took his time and since he was following a GPS, took a seriously long way into the city (we crossed the East River at the RFK Bridge), aggravating us further, and forcing us to change our dinner reservations at Uncle Jack's Steakhouse for a later time (almost two hours later)! No tip for him. 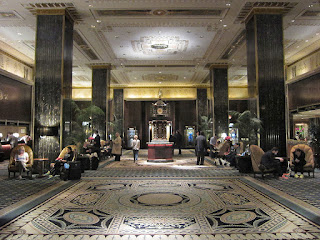 Upon arrival at the hotel the bellman, not the driver helped us out of the car and rapidly got our luggage taken care of so we can check in unburdened.  The ride up to the lobby was not bad, but once we got out of the elevator, we felt slightly under dressed as there were a LOT of people dressed to the nines.  Expensive furs, diamonds, and tuxes with tails were on full display and champagne was flowing freely.  I sat my brood down while I checked us in.  Helen, the front desk agent, told me not to sweat, there was a massive fundraiser going on that night, and the upper class of Manhattan were strictly there for show.  She handed me the keys to the room and directed me to the proper elevator bank up to our floor. 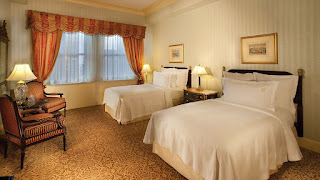 Our luggage was waiting in the foyer of the room when we got up there, and we settled in to unwind for a second and get ready for dinner.  The luggage was in the foyer, Mom checked out the bathroom (which was stocked with awesome Salvatore Ferragamo toiletries) and the bedroom, with its two king beds, while Susie, Dad and I plopped down in living room area, waiting for Mom to finish up.  While she was getting ready, the housekeeper came up and asked if our room was to our satisfaction and when would we be ready for our turn down service?  We told her we are on our way out in about 15 minutes and turn down would be greatly appreciated, as well as a 2nd scrub down of the bathroom, not to mention fixing up the sofa bed for Susie (which was her favorite part).  Off we were for dinner, with a cab waiting for us. 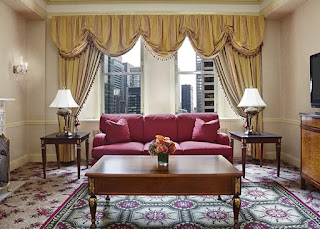 Returning back to the hotel after that amazing dinner we found the room had been turned down and Susie's bed was ready, and the bathroom had also been scrubbed again.  Our room was the Junior Suite, with 2 King Beds and a separate living area, with a total square footage of somewhere between 450 and 600 Square Feet (ours was right in the middle around 525 sq. feet).  The bathrooms were marble and granite and the Waldorf Serenity beds was one of the most comfortable beds I have slept on in a long, long time.  I didn't even need my CPAP machine that night it was so comfortable and good for me.  We all slept soundly and woke up refreshed and ready for our trek to the Brooklyn Cruise Terminal.

The Opinion of this Travel Agent:  If you have only one night in the New York area, and would like to live in opulence for a decent rate without breaking the bank, give the iconic Waldorf Astoria a try.  You'll never regret it, I guarantee it.  But you better hurry, the hotel closes in 2017 for three years for renovations to the structure.

Posted by George at 1:34 PM No comments: