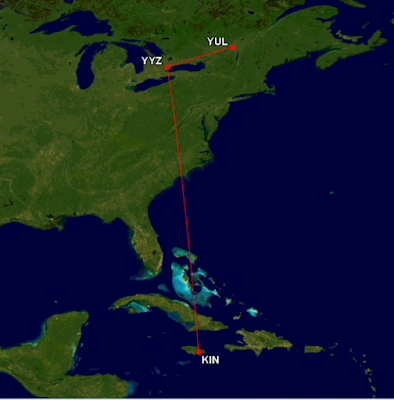 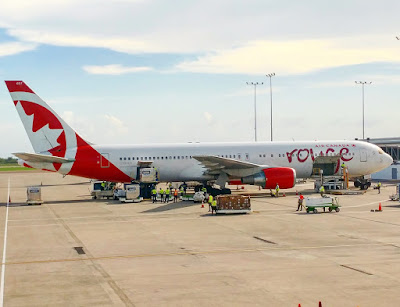 I get a LOT of static from my friends and Travel Agents up North about Air Canada, and especially it's leisure subsidiary, Rouge.  Yet, when I send Americans on AC from the West Coast to Europe, even on Rouge to places like Dubrovnik or Athens, I don't hear a single complaint, in fact, I hear the opposite.  Myself, up to this point have only traveled on mainline Air Canada (and loved the ride), so this trip on Rouge was a definite first for me, and I especially wanted to try the Boeing 767-300 service, as that plane serves those longer flights I book the majority of travelers on, to Athens, Greece. Air Canada (let alone Rouge), does not serve my home airport of Salt Lake City (sort of, every few years they bring seasonal service back from Toronto, albeit on a minuscule Air Canada Express Regional Jet), so the flight I selected had me leaving Kingston, Jamaica (I was on the island for a AAA and Pleasant Holidays sponsored FAM Trip anyways) bound for Toronto, then connecting onto mainline Air Canada for a quick jaunt up to Montreal.  I was looking forward to this so much, I couldn't wait to get to Norman Manley Airport after the FAM.

Soon enough I was on my way from Ocho Rios to Kingston on a very smooth 2 hour bus ride (a FAR cry from the hideous ride on the way in), arriving at the airport with plenty of time to check-in, and get through security and passport control.  Don't get me wrong, the Jamaicans were very nice and very well meaning, and a vacation to the island is a dream for hundreds of thousands of people, but speaking for myself, a Jamaican (or most any Caribbean island - save St. Maarten) vacation is just not my idea of a vacation.  But enough about me. 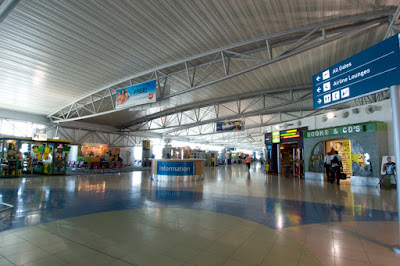 Since space is at a premium in the terminal, passengers wait in the main hall until their flight is called for boarding, as there is very little room in the gate areas and jetways.  This was fine by me, I had found myself a fantastic place to sit overlooking the Kingston ramp and next to a wall outlet to plug in while waiting for boarding.  Before I knew it, the staff were calling for Premium Rouge (all 3 passengers), and Rouge Plus (that's me!) to line up at the gate.  I had booked myself in seat 13A, the window seat, in the second row of Rouge Plus.  Even with a not even a half way full flight, we pushed back a little late, but made it up in the air. 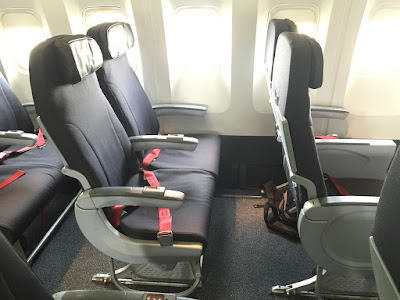 Today's flight was operated by the 26 year old former Canadian Airlines Boeing 767-300ER registered C-GHLK.  She was delivered on October 7, 1992 to Air Europe Italy, then sold to Balair in 1999, who then sold it to Canadian Airlines in November, 2000; just in time for the merger with Air Canada.  I can hear the grumbles from my readers at the age of the plane, but, I have to tell you, she was incredibly well maintained, and even though she has an older layout and seats, she performed the flight admirably.  I really have no problem selling Air Canada Rouge to my clients (especially those going from the US West Coast to holiday spots in Europe.  The space in Rouge Plus is perfect for someone of my size (are you listening, American Airlines?) and I stretched my legs until my seatmate boarded (it was turning out to be one of those kind of trips!) 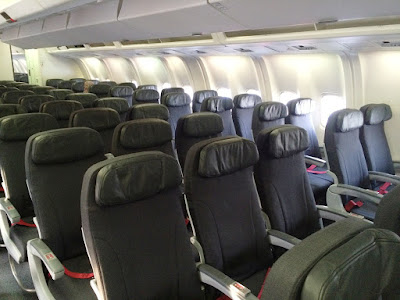 The 4 1/2 hour flight to Toronto was absolutely fantastic.  Right after takeoff, I let the passenger next to me have my seat (a 6'9" Jamaican basketball player takes up a TON of space after all), and I moved to a completely empty center section of row 14.  All 3 seats were mine, so I spread out, and even gave Philbin his own seat.  I passed the flight plugged into the inflight power, cranked up my music, and began journaling my trip.

Yet another feather smooth landing on the 767 in Toronto.  Deplaning was quick, making it a breeze to get through the kilometers of corridors before hitting Customs and Baggage Re-Check and onwards to my connecting flight on Air Canada mainline to Montreal.

I still don't know why so many people give Air Canada (and it's subsidiaries) such a hard time, but every segment I've had on Air Canada and Rouge thus far have been simply phenomenal.