Changing of the Old Guard 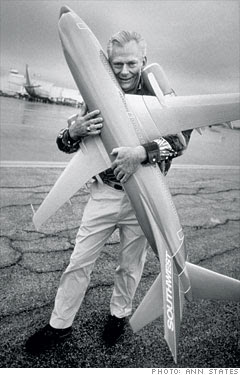 By now, most of the world knows that Southwest Airlines' legendary boss, Herb Kelleher, passed away at the tender age of 87. He was one of the last of the maverick airline chieftains of the 1980's to retire from his post, but his tenure, as most of us in the industry (regardless of which airline we worked at) will agree, is one of the most respected and loved.  I won't go into his background in detail, or into a lot of Southwest's history, but instead, I just want to shed some light on what kind of figure Herb was to us airline folk, and what the industry used to look like.

The domestic airline scene in the 1970's was one FAR different than what we are now used to in 2019.  Back then (before yours truly was even born, let alone the airline czar he is now), airlines were heavily regulated, and the now defunct Civil Aeronautics Board (CAB) ran and ruled on everything from setting fares, to what type of aircraft could be used on what flight at what time of day, to how napkins should be folded on the meal tray!  Ridiculous, to say the least.  The only way an airline could get away with ANYTHING not controlled by the CAB was to be a strictly intra-state carrier.  Only then could an airline fly without restriction say between, San Diego and Oakland, without the CAB needing to tell them when and how to fly, and for how much.  In fact, Southwest Airlines was NOT the original low-fare, no-frills airline.  Nope, not by a long shot.

That belongs to a lovely little carrier named Pacific Southwest Airlines, PSA for short.  They flew DC-3's, DC-4's, Lockheed Electras, and finally Boeing 727, 737's, and DC-9's up and down the California coastline when the big wigs from Southwest showed up at their doorstop.  That's right, Southwest was NOT a pioneer.

In 1969, Southwest's principals, Rollin King and Lamar Muse went to San Diego to see how PSA was run, as their idea was basically a Texas-sized version of PSA intra-California operation.  King and Muse told PSA's chief, Andy Andrews, they knew basically nothing about running an airline, and Andrews turned around and gave the fledgling company full access to every nook and cranny of PSA's operations, from top to bottom.  In fact, the first 737 was leased from PSA, the first reservation system, and all the initial manuals and uniforms also came from the All Smile airline.

So no, Southwest didn't pioneer ANYTHING.  But, when Herb took over the CEO duties, he was one of the most visible airline leaders in the free world.  He was everywhere, TV and print advertising, Capitol Hill in Washington, random cities around the Southwest system, competitor's flights, etc.  Under Herb's guidance, Southwest turned into enough of a economic powerhouse, that, in the late 80's and 1990's, they could do no wrong.  Cities and their respective airports clamored for Southwest to begin service.  Once they came to town, they didn't start with a handful of flights to one or two destinations, oh no, they came in with all guns blazing.  They would start 5-6 flights a day to several cities, usually 405 at first, then constantly growing as the loads developed and maintained sustainable levels.  This would boost a town's population and was a major driving force for new job creation in the area.  This was called the "Southwest Effect".  For years, this was how it worked, and Southwest motivated every single economy it touched.

Even with the random airline purchases Southwest made (Dallas based MuseAir in 1987, Salt Lake City-based Morris Air in 1994), Herb and Co. made sure that the respective employees from the merged carriers were taken care of and had a place to work at Southwest (even future jetBlue and Azul CEO David Neeleman, who started Morris Air, ended up at Southwest for a very brief spell).
The way Herb made Southwest do business was a complete polar opposite from the rest of the industry, save perhaps Delta Airlines.

Even though I never managed to cross paths with Herb, he was one of the few industry leaders I looked up to and admired.  Not because he ran an airline, but they way he ran it, the stories I'd heard about him and what kind of person he was, etc.  There were several saying of his that I used to take to heart as a young up and coming airline guy.

This blog is just my simple and heartfelt way of saying,