The Most Convenient Hub in the West: The NEW Salt Lake City International Airport 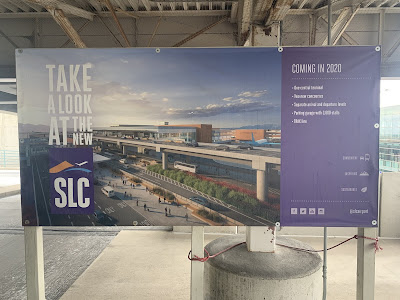 **My first article on the new Salt Lake City International Airport appeared in the April 2015 issue of Airways Magazine.  As happens in reality, quite a few things have changed since that original article.  Enjoy.**


Salt Lake City, Utah has always had an important place in U.S. Commercial Aviation history, and has maintained it's importance through to the 21st Century.  From a postage stamp size field of 100 acres in 1911 to its current size of 7,700 acres, the Airport has grown with the times and advancements and changes with the aviation industry itself.  Now it's time to grow again, the majority of buildings and structures are from the 1960's - 1980's and are not seismically stable, nor big enough to cope with the amount of passengers, both connecting and originating, or able to keep up with the airlines' demand for more flights. 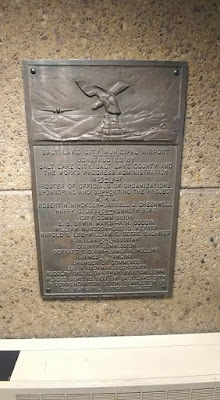 Originally, Salt Lake City was just a stop along the way for United Air Lines' Transcontinental route from New York to San Francisco, as well as the North terminus for Western Air Express' C.A.M. 8 route from Los Angeles, via Las Vegas.  From those small beginnings, SLC grew with United and Western's fortunes, not to mention the region's own growth spurts.  World War II saw the field transformed in a training base and replacement depot for the US Army Air Force.  The dawn of the Jet Age saw the building of Terminal 1 (back then it was the ONLY terminal) as well as airfield improvements including a Category II Instrument Landing System (ILS).  These improvements and Western Airlines new nonstop service to Calgary, Canada enabled the airport to be renamed from the Salt Lake Municipal Airport to the Salt Lake City International Airport.

Deregulation and the 1980's brought more changes, with Western Airlines retrenching and redrawing its entire system to focus on a main hub at Salt Lake City, with a secondary hub at Los Angeles, thereby requiring more facilities.  Luckily the airport had just expanded the main terminal with 2 concourses (A & B, or F and G as they are now known), so a second terminal (Terminal 2) was added, with one concourse originally, followed by a second (Concourse D) 2 years later, all to keep up with Western's ever expanding operations.

During the 1990's more enhancements came, a new runway added, Delta Air Lines (which merged with Western in late 1986) added more flights and built the Salt Lake hub into a fortress of sorts, and the Airport Board began making renovations and plans for the then-upcoming Winter Olympics, scheduled for 2002.  These last 2 decades, Salt Lake City International Airport has been serving 20 million passengers yearly, in a facility built to handle between 10 and 12 million.  SLC was bursting at the seams.  Delta and the other airlines added flights to more destinations and have pretty much maxed out the current airport.  Something had to be done, and soon.


In January 2012, in his State of the City address, Salt Lake City Mayor Ralph Becker announced the launch of the Terminal Redevelopment Program for the Salt Lake City International Airport, to be phased in over the next 8-10 years, generate 24,000 jobs, and cost around $1.8 Billion (the latest cost projection shows it to $3.6 Billion).  The new airport would have a single terminal, new concourses, new parking facilities, a new, expanded, and centralized light rail station, as well as the requisite support facilities to handle it all.  Request for Proposals went out and Holder-Big D Construction was selected as the construction manager at risk in October, 2013.  Work began immediately, with groundbreaking in July 2014.  Opening of the new terminal was originally slated to open in 2018, but like most major construction projects that have major changes partway through, that has been pushed back to 2020, and they are on track for that.

The main difference from what I had originally written in late 2014 and now is the building of the North Concourse, instead of keeping Concourses F, D, & C attached to the new Main Concourse.  This layout makes for a much more cleaner airport layout, much like what Atlanta and Denver Airports look like.  The new airport will have a total of 75 gates, all jetway equipped, a trade-off of the 88 gates at the current airport, but only 56 are jetway equipped.  Delta Airlines will have a greatly expanded SkyClub, with an airside SkyDeck, where Club members will have an outdoor patio view of the ramp.  This feature has proven popular at all current SkyClubs that have one. 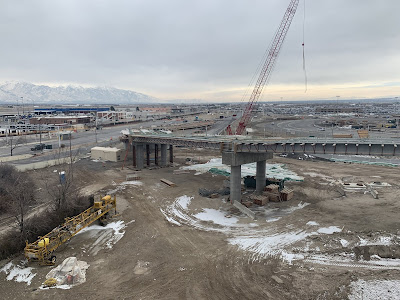 Ingress into and egress from the airport is also streamlined.  Currently, there is 3 lanes for passenger drop off, and 2 lanes further away from the terminal entrances for passenger pick up.  The lanes closest to the entrances are for commercial traffic such as buses, taxis, and private shuttles.  A rather inefficient setup for today's traffic levels.  The new airport's main roadway will be split into two levels, with Level 1 for picking up (both private and public), and Level 2 for dropping off departing passengers.  This will make for a far smoother traffic flow, and seriously decrease traffic jamming up at peak times.  Also, the Utah Transit Authority's Airport Light Rail Station will be located at the East End of the new rental car facility. 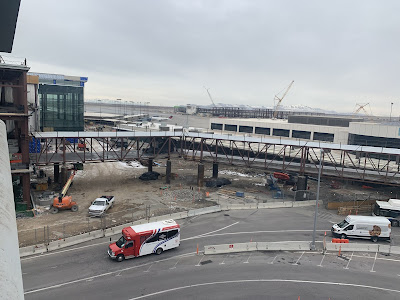 The Department of Airports, contractors, and architects have come together to create a project that will have achieved LEED Silver Certification upon completion, with an ultimate goal of Gold Certification, of which only 9 airports in the United States have achieved.  All airport vehicles are making the transition to electric power, contributing to the targeted emissions-reduction program already in progress at the airport, and keeping in alignment with the City's own emission reductions goals.  The airport expects to have all vehicles electric powered by 2024.

At the time of this writing, the Main Terminal is scheduled to open in Fall 2020, with the West side of the new South Concourse going online and connecting to the current concourses, and the demolition of the current Terminals, parking structure, and concourses E & G simultaneously.  Demolition of concourses C & D are scheduled between 2021 and 2024, along with completion of construction of both new concourses' East sides and opening of the North Concourse as well.  By the end of 2024, there will be virtually no aspect left of the old airport, and the new airport will be up and running completely.


The Jet Lag Junkie's opinion:  I honestly can't wait for the new Salt Lake City International Airport. Yes, I have had so many good memories in and out of the current airport growing up, and as an adult.  I grew up within those hallowed halls, watching Boeing 727's, L-1011's and other airliners from airlines like Delta, TWA, America West, and Continental take off for far flung destinations.  Granted, this was all before post-9/11 security measures closed off the airside concourses to passengers only, when a kid could pass through security and spend entire days gazing out the windows watching the planes. 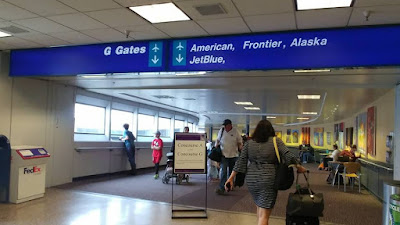 Western Airlines advertised their new Salt Lake City Hub as "The Most Convenient Hub In The West".  It most definitely was.  The concourses were not miles long, and you could connect to another flight or collect your baggage with ease.  The new SLC promises the same, and even though Delta has grown the hub by more than double what Western ever had, this layout is still convenient, and easier to navigate through than other hubs in the region.  Salt Lake City was, and still will be, a hidden gem of a hub guaranteed to faithfully and admirably serve the region well for generations to come, as it's predecessor did. 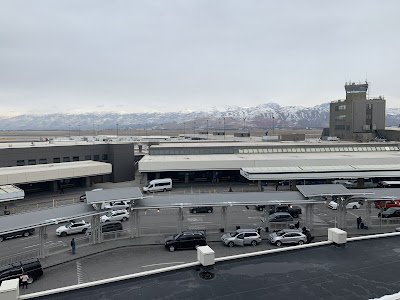 **All photos the Author's own except where credited**